«Huset Vårt» is a homely, elderly house near the village centre in Hornindal.

It is located close to the Anders Svor Museum and the Hornindal Lake â the deepest lake in Europe.

«Huset Vårt» has today 2 small flats for long-term hire. In addition, it has 7 twin/single rooms with 10 beds, all based on self-catering.

We also have reception rooms for smaller arrangements, such as Confirmations, Christenings, anniversaries, commemorative ceremonies and the like. Our premises are also very suitable for courses and meetings of all kinds.

Extensive renovation work has been carried out on «Huset Vårt». The job has partly been done by hired carpenters, but a substantial part of it has been done by local volunteers as a communal effort. Renovation and repair work is still going on.

It is run by a board assisted by a property management group.

«Huset Vårt» is a stately log house in neo-classical style. It was built in the late 1930ies as a home for old people, and functioned as such from 1939 to 1981.

Over the years the house has had several other functions. There has been a doctor's office, it has been used as an activity centre, as a nursery school, and for letting out flats and rooms.

When the nursery school moved out, the idea arose to tear it down and build local authority houses for pensioners on the site.

It was then that enthusiasts for the preservation of this old home started a campaign to extend its life as a meeting place and activity centre.

Thanks to funding through a county project to promote such initiatives, necessary renovation work could start.

Then, in 1994 the foundation «Huset Vårt» was formally established, being owned by approximately 60 private persons and run by a board and a property managegement group. 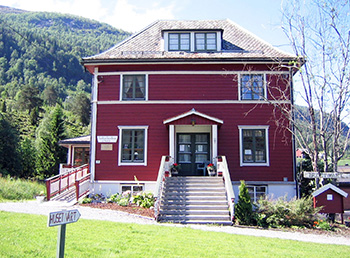 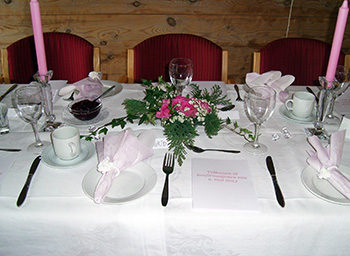 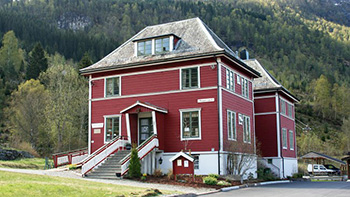